One of the outstanding benefits of the completion of the railroad, from our point of view, was the circus that came to Madras [May 11, 1911]. The circus came on the railroad [Harriman’s Deschutes RR] that came up through Gateway. Their depot was on The Plains up the hill from the town of Madras. The circus tents were put up in the vacant land west of the Depot and railroad tracks. 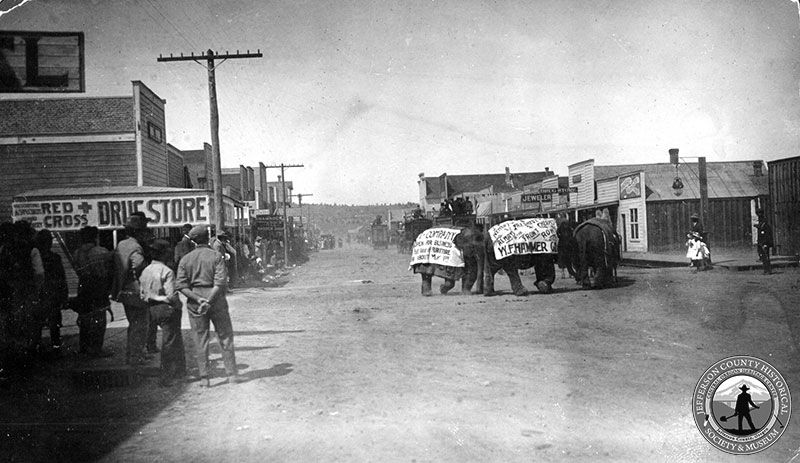 Papa used a team on the buggy and we all rode in. When we reached the grade that led into Madras the team became very skittish and began to prance and snort excitedly. The road leading to the Depot came in here. The circus animal wagons pulled by horses, the elephants, and all that went into the parade were being taken down the road. Papa pulled off the road and waited until the procession coming from the Depot had gone on ahead. I was struck by the fact that the elephants’ trunks were flexible and could be used so dexterously. I had a toy mother elephant and several little ones that Aunt Janie had given me for Christmas. They were made of porcelain and, of course, rigidly fixed in one position. It had not occurred to me that real live elephants could be so ponderously agile.

The horses continued to fret and snort but we got down the hill and lined up with the crowd to watch the parade. There was a brass band with a very loud drum. There were clowns along with the wagons and elephants. The coverings had been taken off the wagons so that we could see the animals through the bars
After the parade we ate our lunch and went back to the Depot to see the performance. There seemed to be an enormous crowd of people. Various side show barkers were haranguing the crowd from little stands. . . . It was a Ringling Brothers circus and in later years I came to realize that it was bigger and better than one would expect to find in an “off the beaten path” place like Madras.