“The trip was made in a four-horse stage from Shaniko. As the coach was crowded, several [of us] young men rode on top. It was a ride I will never forget. Speed, handed down from the times when Indians and bandit attacks were common, continued to be the proper way to drive a stagecoach. I had great fear of being dumped off and left behind as the stagecoach shook, rattled, and wobbled over ruts, rocks, and sagebrush. Going down Cow Canyon Creek Canyon was a breath-taking thrill, as the horses rushed on at an unusual rate of speed. The driver never relaxed his whip or urging until it seemed the horses must die of exhaustion. I held on to my hat and tried to ease myself gently back in the same spot from which I was forced with each surge of the coach. I finally got the spirit of the thing and let my imagination picture our getaway from bandits or Indians . . . . “

Tom Power’s arrival in Central Oregon on the Shaniko-Prineville stage, 1911 (Thomas A. Power homesteaded west of Blizzard Ridge, and served as Jefferson County Judge during and after WWII.)

“The layover drivers at Bakeoven were supposed to have gotten ptomaine poisoning, maybe too much sheepherder whiskey, and were unable to take the stages through. Mr. Burgess told me I would have to take the Prineville stage and another young man The Dalles stage as the mail had to go through. We had each worked in the harvest fields all day and now had to drive all night . . . I forgot to fill my lantern so the driver’s light went out prior to going up the McPherson [Hunter] Hill, which used to be quite a pull, not much now. My team got out of the road and wound up astraddle a rock. 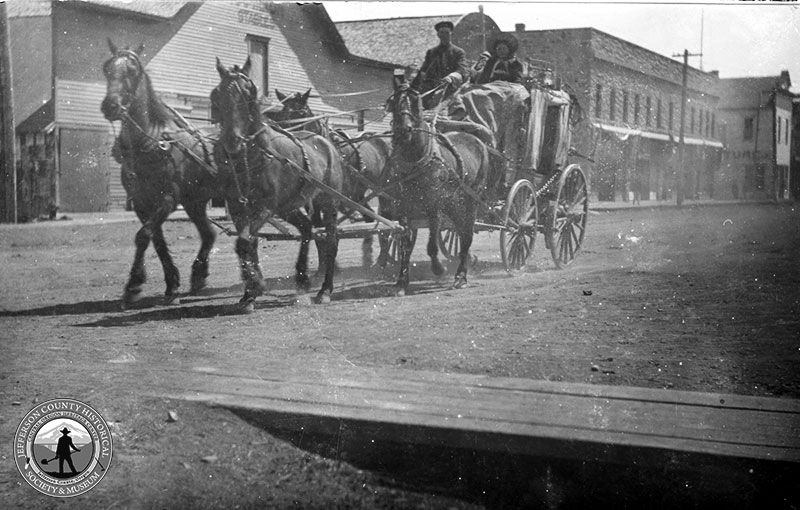 “A fellow at Heisler Station said, You are an hour behind and if you lose any more time you will probably be turned in for a fine by the contractor. He filled my lantern with coal oil and said You will get your very good horses at Cleeks, and when you get to the top of Grizzly Mountain [summit of Grizzly Grade on east shoulder] let them go down into Prineville. I sure did but could not make up my lost hour so the old Postmaster started to roast me for being late but I had two old ladies on the stage who tied into him. They said they never had such a wild ride in their lives and that I came as fast as the horses could run. They exaggerated some as the horses were not running only on the downhill curves. Those thoroughbrace coaches rolled around considerable on rough roads, the only kind we had then.

“The part I regret is that there was supposed to be a lunch for the driver in a cupboard on the back porch of the old Cleek house on Willow Creek, reached generally about daybreak on the night drive, which I did not find out about until the next day. The old stage road went up Hay Creek by Parrishes and the headquarters of the ranch [Hay Creek] to Cleeks, and Grizzly . . . . “

John C. Todd’s memory of his first try at driving an overnight Cornett stage between Bakeoven and Prineville, in the 1890’s (Todd’s father, John Y. Todd, established “Farewell Bend” ranch near what is now downtown Bend in 1877.)

(both passages from Jefferson County Reminiscences, pp. 23-4 and p. 27)