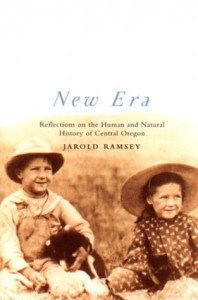 New Era: Reflections on the Human and Natural History of Central Oregon

I was talking about straw-hauling after wheat harvest. The great incentive to finish with the straw was that we could then take a vacation, generally a camping trip up in the Cascade forests, far away from combines and chaff and straw piles. One afternoon in August 1945, as were topping out one of the main stacks in front of our house, we heard the Warm Springs mill whistle hoot over and over again. Presently an endless line of cars appeared on the highway, heading for town, horns blaring. Somebody who knew us leaned out of his window and hollered, “THE WAR’S OVER—JAPS SURRENDERED—BIG SHINDIG IN TOWN TONIGHT!” We actually quit early, an unheard-of concession. I remember reflecting that if this had happened during harvest, we wouldn’t have paid any attention, and a few days later we would have been up in the mountains! Excellent timing, General McArthur!

That night, we gathered in the Madras City Park to sing patriotic songs and hymns; the soldiers from the airbase north of town had hoisted a piano onto a flatbed truck, and then lifted my mother up to play on it. Hoarded prewar booze was passed around, scandalously, in full view of the Methodist and Christian churches. Before the celebration divided between the revelers and the sobersides, talk ran through the crowd of the newfangled bombs—just two of them—that had destroyed the two Japanese cities. Someone joked about getting such a device war-surplus to blow the rocks, once and for all, out of his back forty. But in church that Sunday, our stern preacher asked the question that still haunts our lives, mushroom-shaped. “The terrible war is over, thank God,” she said, “but consider, what new violence have we begin?”